THREE people said spirits of the dead physically touched them during a séance at Alexandra Palace, including a woman who claimed she felt her “face get slashed” before “blood ran out”.

TV Psychic medium Charlotte Codrai carried out the paranormal activity in the upstairs of the 140-year-old building in an attempt to contact the dead connected to the history of the famous entertainment venue.

Around 20 other people took part in the séance which was watched by an Express.co.uk reporter in a darkened room on the first floor.

After putting them into a psychic trance, Ms Codrai, who insisted she knew nothing of the history of the landmark, began receiving a series of visions about its past, including “the sound of fire and a huge commotion.”

At this point, a startled woman in the circle gasped: “I feel like someone just slashed my cheek and blood is coming out. My hands feel numb now.”

There were no visible injuries on her, however.

The event was a key feature of the Mind Body & Soul new age exhibition on the ground floor of the building.

But while thousands of visitors downstairs browsed stands with massage, crystals and the latest in yoga and new age philosophies, Ms Codrai, who has worked with the likes of Derek Acorah was summoning the restless dead.

Before the drama the medium, who has appeared on paranormal programmes on Sky TV, said she did not feel any negative spirits would cause trouble but precautions were needed.

Everyone was asked to sit and hold hands in a circle before closing their eyes. 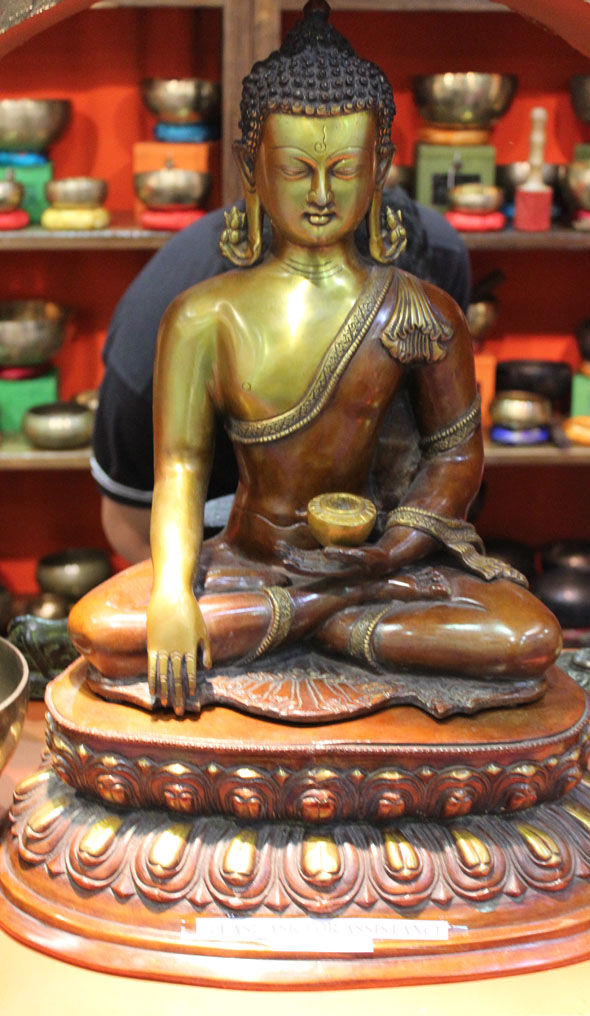 The festival is popular with new age and yoga fans 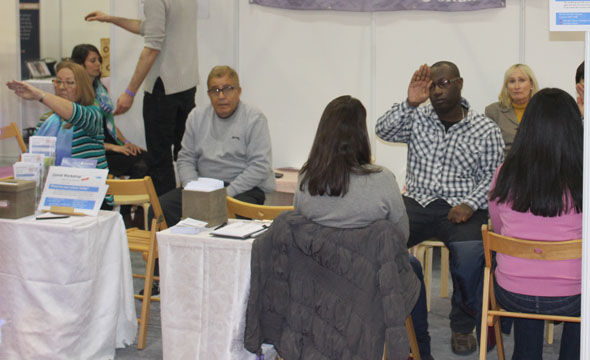 Ms Codrai said: “I am going to put a protective layer around us to ward off any negative energies. I doubt there will be so don’t panic.”Everyone imagine tentacles in the floor going up your legs to keep you supported.”

She then got them to imagine a “wonderful red orb of energy travelling into their spine – the root of their Chakra.”

In some Indian religions, Chakra is said to be a spiritual energy point within the body for the life force prana.

After an array of imagined coloured orbs were virtually inserted into various chakra points across their bodies, and the group were deep in trance, she began to summon the dead.

She said: “I call upon the spirits of Alexandra Palace to step forward and influence us in some way.”

Turning to the group, she said: “You may feel breath from them, or them touching your hair just allow them to draw closer. You may get a feeling like fine hair or cobwebs across your face as a spirit draws closer.

She then felt the presence of a malevolent spirit called Arthur, who she believed could have been a former caretaker.

She said: “I am getting the name Arthur over and over again. A caretaker?

“He is quite grumpy and not happy with us being here or anyone being here. He was grumpy with a deep voice and this is his place. I think he worked up until the end.” 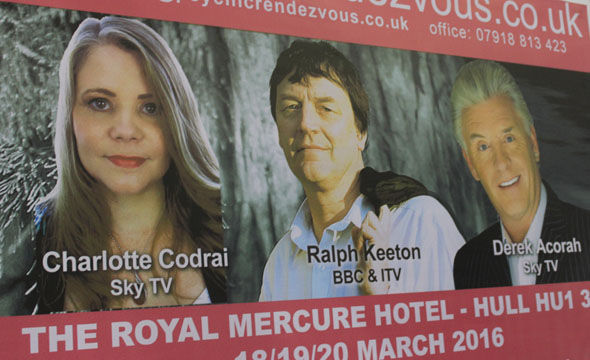 Charlotte Codrai is one of the biggest psychics in the UK

The people taking part sat hands held in this circle

A man in the audience, who said he was also a psychic, said he was pushed from behind.He said: “I felt something on my back and legs. Two hands on my back which pushed me forward.”

He added he was rocked back and forward and felt red hot to cold quickly.

A middle-aged woman also reported a bizarre experience, where she felt her arms being forced upwards by something.

The psychic then picked up on a female spirit, who she said wanted to communicate with a woman to her right.

She said: “Do you understand Shirley. Is Shirley in spirit? Did you know her to have a bit of an accent?

“She was quite a bold woman, forthright, and needed to have her voice heard. Quite stubborn.

“She had a stomach problem. It was quite unfortunate.”

The woman said she understood this.

But the woman was not sure why Ms Codrai then got the sensation of butterflies in her own stomach or said the name of nearby Hornsey.

Ms Codrai added before this spirit allegedly left the room that the woman had a problem with her hip and back on the right side, but the woman said her back pain was on the left.

A drop in temperature is also allegedly said to signal a spirit emerging.

Ms Codrai used a digital temperature reader to test this and members of the growp used it on each other which showed in varied from 10C in one corner, to 21C at people’s legs and around 28C on their upper bodies.

She also used a digital radio, amid claims spirits could speak through it, but the experiment was abandoned for technical reasons.

The séance ended with a table-tipping experiment.

This is when the group rest their fingers on a table to communicate with spirits who are said to be able to move it from side to side or even raise its from the floor in extreme cases.

She said it was her first ever attempt and urged the buildings’s spirits to use their energy to “lift the table”.

Little happened, but some of the group reported feeling four or five vibrations as if it were about to start moving. 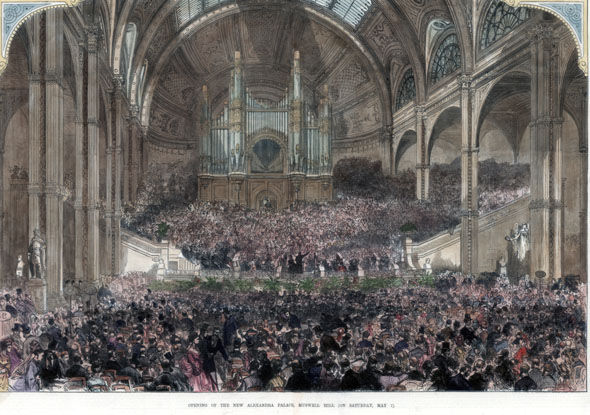 A picture of the original opening of Alexandra Palace

Sceptics have suggested the very fact that several people are touching an object from all directions, even the slightest tremor will begin a chain of movements.

But believers claim this would never cause the violent rocking and even levitations that are recorded as happening.

To finish, the remaining 17 circle members were asked if they had experienced anything.

Only three said nothing at all happened.

The 14 others experienced temperature changes or the cob web sensation.

“Quite a lot happened, I think the spirits really were trying to communicate,” said Ms Codrai.

After the séance Ms Codrai allowed our reporter to test the digital temperature gun, which gave readings of 21C in the room and 28C when aimed at her.

She said: “If you took it all down it will be interesting to research what was right. I knew nothing about Alexandra Palace and did no research because that would be cheating.”