Satan’s Hollow: Tucked Away in the Ohio Woods Exists What Some Insist Is a ‘Portal to Hell’

Locals have dubbed it a “portal to hell.”

Tucked away behind the Ohio woods exists “Satan’s Hollow” – a storm drain that supposedly serves as a gathering spot for devil worshipers.

“It’s one of the best known, but least seen, urban legends around here,” local blogger Rick Fenbers wrote. “A group of Satanists supposedly used to meet there in some type of altar room and conduct their rituals. … They must have been pretty good, because the legend claims they managed to open a doorway to hell.”

And, while it may simply sound like local folklore, some insist it’s not. As WCPO-TV noted, many claim they’ve heard screams from inside the tunnels at night. Others say they’ve seen things that can’t be explained.

Paranormal filmmaker David Scott published a YouTube tour of the site and said he was terrified throughout the shoot.

“This is one of the scariest locations I have ever investigated,” he said.

Footage from his video shows the inside tunnels emblazoned with “666″ and other signs associated with the devil.

Rumors even persist that a demon known as the “Shadow Man” guards the portal to hell.

“He is some kind of hall monitor from hell, left here by Satan to guard these tunnels,” Fenders explained. “The Shadow Man is said to appear in the form of a human, only completely blacked out. Hence his name.” 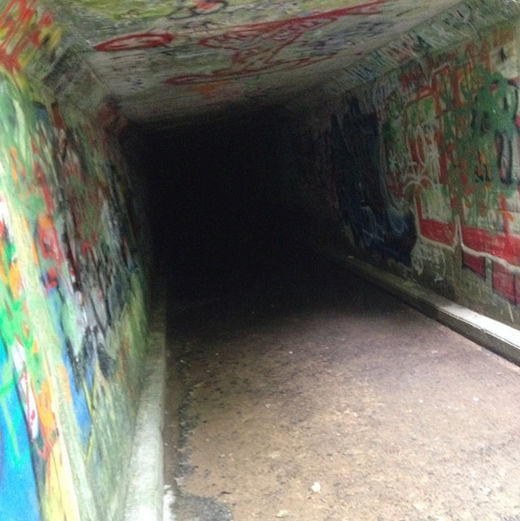 Nevertheless, local law enforcement insists there is no paranormal activity taking place at “Satan’s Hollow.” Instead, they chalk interest up to rumors continuing to persist and say that because the storm drain is on private property, it’s also a burden on those who live nearby.

“It’s rough on the homeowners,” Blue Ash Police Lt. Steve Schueler told WCPO. “People park in their driveway and try to get into the drainage system and nobody likes that. (The owner) has had to chase off some people, for sure.”

Officers additionally dispute charges that the location is used for sacrifices.

“We’ve talked to some kids and warned them,” the officer added to WCPO. “We were all teens at one time and did crazy stuff. We try to give them a warning and get them on their way.”

However, despite warnings from authorities, it’s likely the “portal to hell” will continue to attract curious visitors.