The Good, The Bad, And The Ugly Of The New ‘X-Files’

It’s been fourteen years since The X-FILES last graced our television screens, and many years longer since the show’s heyday. Watching the first three episodes of the new six-part series reminds me that I’ve forgotten as much about the show as I remember, and that its best episodes have stuck with me much more profoundly than its bigger thematic questions and overarching plot.

I always loved The X-Files for two reasons:

First, the fantastic duo of David Duchovny and Gillian Anderson as agents Fox Mulder and Dana Scully—the conspiracy theorist and the skeptic. Like many others, I fell in love with these characters. Where they went, I followed.

Second, I loved the weird stories that mixed the supernatural with detective work, and left you wondering what was real and what was merely illusion or deception. In one brilliant episode, the story was told from both Mulder’s and Scully’s very different perspectives, to drive home just how tricky it can be to define “the truth.”

That episode, “Bad Blood” (written by Breaking Badcreator Vince Gilligan) is what I always point to when I start waxing nostalgic about the show. It was everything that made The X-Files great wrapped up into 42 minutes or so.

But there were many others of a similar caliber. As much as I enjoyed the Cigarette Smoking Man and the Big Conspiracy and the alien stuff, to me The X-Files was always a show about these two characters confronting the inexplicable in whatever form it took. Sometimes it was tense, edge-of-your-seat suspense. Sometimes it was hilarious. Sometimes it was alien, other times it was magic, demonic, biological.

A mysterious fungus that traps people and makes them hallucinate vividly as it feeds on their bodies; a man who transforms into Mulder, leaving Duchovny to play a much different version of “himself”; the brilliant Clyde Bruckman’s Final Repose. So many terrific moments, woven together within the framework of Mulder’s bigger quest to find his sister, with the larger questions of conspiracy looming above, but sometimes still very distant, from our characters.

Now The X-Files have returned, and Duchovny and Anderson are reprising their roles as Muller and Scully. The two-part premiere airs tonight and tomorrow night. Reviewers such as myself have seen the first three episodes already—fully half of what this brief return to The X-Fileshas to offer. Let’s talk about the good, the bad, and the ugly of what isn’t quite a reboot and is in no way a remake, but rather a return, and in some ways a return to form. 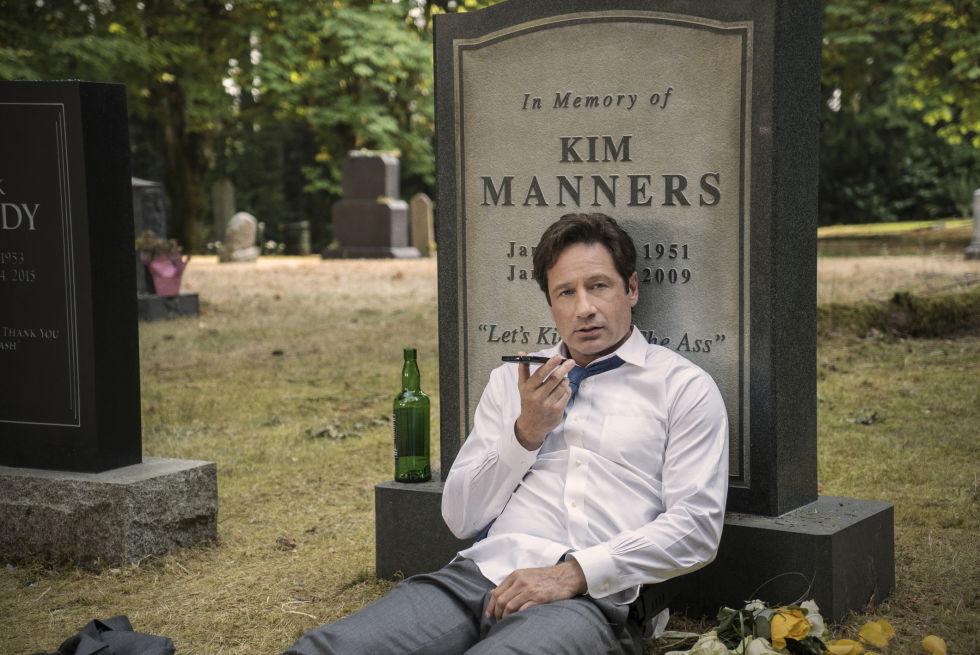 I’m glad I was given access to three episodes to review the new X-Files rather than just the season premiere. That’s because each episode is better than the last. The third one, “Mulder & Scully Meet the Were-monster” is firmly in the tradition of X-Files episodes I love most: the comedies.

This story of a strange encounter with—as the title suggests—a “were-monster” is fun and hilarious and full of all the weird quirks that made many of the show’s best episodes come alive. It’s the sort of episode that makes me want to go back and watch as much old X-Files as I can. Mulder is particularly funny here, and the whole thing plays out with some nice twists and turns and laugh-out-loud moments.

Still moving backwards we come to the second episode, “Founder’s Mutation.” This is a return to some of The X-Files darker “monster-of-the-week” episodes. There’s bits of the larger conspiracy at play here, but mostly this is an episode about smaller, more personal cover-ups and some frightening supernatural abilities. It’s a solid episode, very evocative of many of the better, darker episodes of the show’s first five or six seasons. It’s not big on comic relief, but it’s not particularly preachy either.

Both these episodes help get me excited about the last three. It feels very much like The X-Files I once devoured. The show may take place in 2016, but it still feels like the 90′s in many ways. Mulder is hopelessly bad with technology. Smartphones operate as a running gag half the time, and the other half the time, Mulder simply doesn’t pick up the phone. In an age much more connected than when Mulder and Scully last collaborated, they still often find themselves in situations where they can’t reach one another.

Mulder also finds himself in a world where too many secrets have been uncovered, and too many mysteries have turned out to be hoaxes. He questions his life’s work as he pours over the old X-Files. “The internet’s not good for you,” Scully tells him at one point. So the show feels like a return to form at times, and at times it seems to be an examination of itself and its characters, turning them on their heads a little bit and making them wonder what exactly they’re doing. Scully seems more interested in pursuing some of the cases than Mulder does. 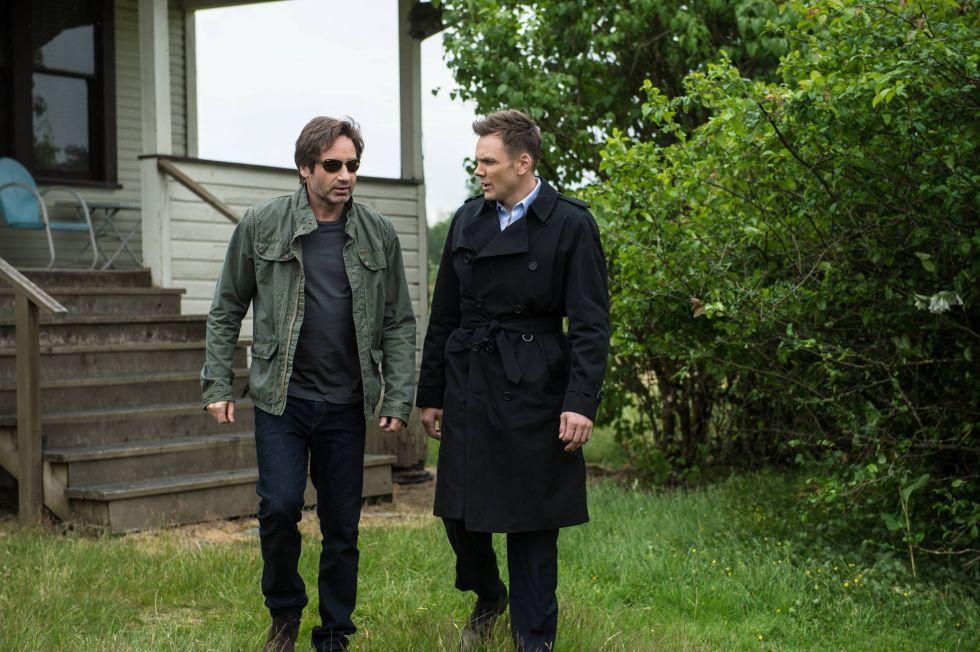 Moving backwards still further we come to tonight’s season premiere—the reintroduction of The X-Files and its leading man and lady. Not everything about this episode is bad. It’s fun to see these characters again. The people and mysteries they encounter are interesting, and certainly help get us back into the swing of things again—into the mindset of the 90′s transported now into a post-9/11, post-Patriot Act world.

The problem is that it’s all much too heavy-handed. All the mentions of current politics feel forced. You half expect Mulder to step off the X-Files set directly into Michael Moore’s next film. Everything unfolds too quickly also, to the point where it almost feels strange to leave behind this rapidly progressing mythology in episode one, to the more procedural “monster-of-the-week” and comedy episodes that follow. Maybe this was always a problem with The X-Files and I’ve simply forgotten how jarring it could feel.

The grandiosity of the opening episode simply doesn’t work for me. Mulder comes off as sanctimonious. Scully’s motivations are impossible to pin down. The conspiracy stuff rings even hollower.

When Mulder and Scully are reunited by online conspiracy celebrity Tad O’Malley (Joel McHale) and he starts talking about how he’s going to go public with all the conspiracy stuff, all I could think is…yeah, nobody is going to care. The government, the conspirators, nobody is going to come and stop him from saying this stuff to the world. That’s not how people actually clamp down on conspiracy nuts these days—they simply ignore them, and most people don’t believe them anyways. The sense of urgency, the sense that Big Bads are going to come and cover everything up, isn’t really present because it’s just not that believable to begin with. When the Big Bads do come…it feels completely unnecessary.

I’m not sure how all this is going to play out in the back half of the season, but I’m hoping it’s all handled a bit more deftly.

The show has been updated in some ways, and in others it remains the same. Special effects have certainly gotten better, but monsters remain pretty cheesy—almost certainly on purpose. The opening credits haven’t been changed since the 90′s, which is both ugly and wonderful at the same time.

Basically, the show looks better than ever, though Duchovny has aged.* I’m not sure Anderson has at all, to be honest. She looks every bit as good as she did back in the day, maybe even better. Both characters, however, feel right at home on my TV screen.

In this regard, there’s not much to complain about. The tech behind the show has improved, and we’re all watching it on high-definition displays now, but not much has changed. We remember those old shows as wider and crisper anyways. If you were hoping for new, for bigger explosions and crazy CGI, you won’t find much of it here, and that’s okay.

Being stuck in the 90′s is both good and bad. Good for nostalgia, but not always great for humor. A transgender prostitute hitting “like a man” isn’t the most tasteful of jokes. Then again, a man driving a letter-opener into his own ear and through his brain isn’t a particularly tasteful death, either, but it’s the sort of bizarre suicide we’d expect from this show.

All told, I’m excited about the next three episodes of The X-Files. I wish there were more than just six episodes. Maybe it’s all for the best that a six-episode arc is all we’re getting; maybe it’ll turn out to be exactly the right number of episodes to tell this story, and maybe when it’s all said and done we’ll be content to watch our heroes ride off into the sunset. It’s too early to say.

For now, I suggest a little patience with tonight’s opening salvo. It gets better as you go along, and it’s plenty of good, nostalgic fun along the way.

*Some people seem to think that noting that Duchovny has aged is meant as an insult. I’m not really sure why. Getting older isn’t a bad thing, and pointing out that Mulder looks older—he looks tired, actually, beaten down a bit, which I think works well—isn’t insulting unless you think being older is insulting. That’s on you as a reader, though. Duchovny looks a bit more rugged and stately as far as I’m concerned; less boyish and more dignified. Both Duchovny and Anderson look like they could easily handle a few more seasons….