Ghost tries to sell me her house

First, I should say that I don’t believe in ghosts. Never have. I’m far too sensible ever to be spooked by the unexplained or mysterious.

But when the postman told me: ‘They found her lying on the living room floor; she’d been dead for two weeks,’ his words sent a chill down my spine.

They still do, more than a decade later, because those words were the final twist in the tale of my very own ghost story.

It was shortly after my much publicised divorce in 1999 that I began house hunting; looking for a new headquarters for me and my four boys, our nanny, and visiting relatives and friends.

Up until then, we’d been in a huge sprawl of a manor house, complete with 17th-century spiders, and I wanted something altogether more compact, with easy access to shops and bus routes for the boys to attend their various schools.

I really fancied one of those gorgeous Regency terraces in Leamington Spa, but when the agent rang and told me about a large, detached, Victorian family house near Warwick Castle, with its own granny annexe and a picturesque well in the garden, I got ‘that feeling’ that perhaps this was the one.

He said the property was just about to come onto the market – he hadn’t even prepared the details – but, perhaps, I would like to see it straightaway?

As my car crunched on the gravel of the imposing driveway, I was excited.

The castle loomed high on its hill nearby, the shops were near but not too close, and there was a bus stop just a few houses away. The house was shielded by huge fir trees (very Narnia, I thought) and a large double gate had been opened for me to enter. 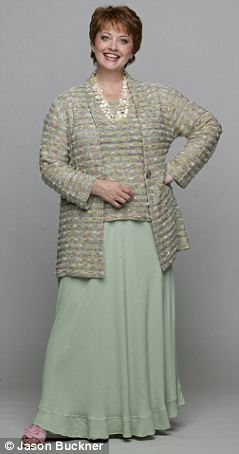 Spooked: Anne Diamond never realised house-buying could be so hair-raising

As I approached the door, it was opened by a white-haired elderly lady who was friendly and chatty as she showed me around what was clearly a much-loved home.

She said she’d brought up her children there – but they now lived abroad and were pressing her to sell the house and move into a retirement flat. She said she’d be sad to leave, but happier to think the house would ring to the sound of children’s laughter again.

‘Well,’ I said, ‘I’ve got an enormous family and we love parties!’ and she seemed genuinely touched when I told her about us, where my boys went to school (her son had attended the same) and how we loved the area.
I did rather hope to win her over, because I didn’t want her to put the house on the general market. I wanted to snap it up before others started looking around.

So, as soon as I got home, I rang the agent, told him I loved it, and offered the asking price. Deal done, he and I thought, and I immediately started dreaming of my plans for the place.

So I was devastated when, only a week or so later, the agent rang and told me that the house had been taken off the market, because the old lady had decided not to sell after all.

She sent her apologies, he told me, but said she simply couldn’t bear to leave the place.

Was there anything I could do to change her mind, I asked? No, he replied: this sort of thing happens all the time in his world.

Very often, he added, vendors do it just to see how much money their house is worth while they make retirement plans.

Disappointed, I started house hunting all over again. But you never really forget a house that you’ve fallen in love with.

Then, out of the blue, about six months later, the agent rang to tell me the house was back on the market. It was now empty and ready for a quick sale for just a couple of thousand pounds more. Was I still interested? If I called around right now, he’d give me the keys and let me show myself around. My mum had been staying with us so I took her with me as she has a keen eye for property. We collected the keys and made our way.

This time, the gates were firmly shut, and I had to open them with the large, jangling bunch of keys I’d been given. 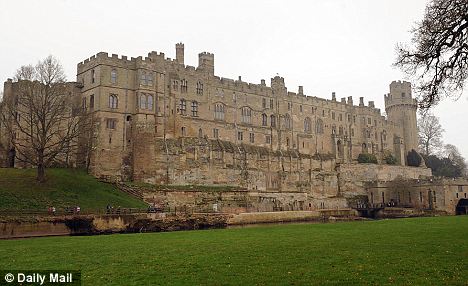 Eerie neighbourhood: Warwick Castle could be seen from the house

But, as we stood on the doorstep and I fumbled for the front door key, the door opened and the smiling little white-haired old lady was there welcoming us in, just as before. She apologised for the place looking so bare and unfriendly. She beamed when I introduced my mother, and then added: ‘You know the layout, I’ll leave you to show yourselves around . . .’ With that, she shuffled off, a thin, pale figure, towards the kitchen.

The light was fading, I remember, so my mother and I decided to have a look at the upstairs rooms first, and work our way down. The rooms seemed huge without any furniture and the whole place echoed eerily. That was when I tried to switch the lights on, and realised the electricity had been turned off.

We made our way down the stairs and my mother called out to the lady, to ask if she had a torch. But we couldn’t find her anywhere. I remember thinking how odd it was that she’d let us in, and then abandoned us in the dark.

Never mind, we thought, we’ll have a quick peek at the downstairs rooms, and let ourselves out.

Even though there were no curtains in any of the tall, sash windows, there was very little light to see by. Outside, those massive fir trees cast long shadows, and the privacy I’d so valued suddenly became a bit gloomy.

My mum sat down and sighed: ‘We can’t really see anything now, but I can tell it’s a wonderful house. Big, solid, sensible, lots of rooms: you could do a lot with this place.’

And as she chattered on, we both suddenly became aware that she was, indeed, sitting on something. Yet the room, like the rest of the house, had seemed utterly empty just a few minutes ago.

My mother sprang up – and we both peered at the large object she’d been sitting on.

In the dark, it seemed like a large wardrobe lying on its back in the middle of the living room. ‘I don’t like this,’ my mum whispered. ‘It’s the shape of a coffin.’

Neither of us are superstitious, and we both instinctively know that most ‘inexplicable’ things can be explained somehow, and that imaginations run wild in the dark. But we both bolted for the front door, and only felt safe again once in the car, driving away.

Next morning, I called around to the estate agent to return the keys and explain why I’d left without closing and locking the gate.

The agent was adamant: no one could possibly have been there to let us in, he said. There were no neighbours with keys. I had the only set.

He explained that the old lady I had met the first time, the owner, had died quite suddenly, and her children had cleared out the place and put it back on the market.

That had all happened weeks ago. She was dead and buried. No way could it have been her who let us in yesterday.

But what about the huge box in the middle of the floor?

‘The place is totally empty, I assure you,’ he said, by now convinced I was a nutter.

To quell my fears, he offered to take me round to the house then and there. So we revisited it.

Again, the house looked warm and welcoming in the morning sun. And there was nothing in the living room, at all.

‘Do you still want to buy it?’ he asked.

As I was climbing back into my car, the postman walked past.

‘Are you going to buy that house?’ he asked.

He went on: ‘It’s been with the same family for years and years. But it was very sad how the old lady died.

‘She was in the house for two weeks before anyone found her.

‘In the end, they had to break in – and there she was, just lying dead on the living room floor.’

Half of me is convinced I did the right thing by walking away from that house. The other half will always wonder.

Did that little old lady come back from the dead to make sure I bought it? She’d seemed so keen at the time that her lovely house should go to another big family, to fill it with joy and laughter.

Perhaps she returned, ghost-like, to show me around one last time?

But even that thought still doesn’t explain the box in the middle of the living room. That was just one Gothic step too far.