Nightmares have always stumped us. For thousands of years, civilizations attributed harrowing dreams to gods, demons or other occult forces. Even with scientific progress, demons continued to shoulder blame into the 19th century. At the same time, “medical men” started pitching non-supernatural explanations, implicating behavioral factors such as rich food and sleeping position. Progress was slow.

Today we recognize recurring bad dreams as an official disorder, and no longer tell rattled sleepers to lay off the fried chicken, flip over and light some sage. Regardless, nightmares remain a source of controversy and mystery. Experts disagree over the defining elements of the experience, the biological function of bad dreams and the ways in which nightmare-sufferers differ from their soundly sleeping counterparts. Still, we know quite a bit more. Here’s a look at how far we’ve come in our understanding of bad dreams.

Until 1830 or so, the term “nightmare” technically referred to the incubus, the supernatural creature that sits on a sleeper’s chest during an episode of what we’d now call sleep paralysis. (The word nightmare is derived from the word “mara,” which meant monster in Germanic.)

In the late 1700s, The Universal Etymological English Dictionary went so far as to define a nightmare as a “disease when a man in his sleep supposes he has a great weight laying on him.” It’s reasonable to assume that “great weight” is the above-mentioned creature.

In retrospect, it’s not always clear when “nightmare” meant a demon visit, a demon itself or a scary dream, more broadly. But the incubus pervaded both medical literature and mainstream culture, the most famous example being the Henry Fuseli’s 1782 painting, The Nightmare.

As dream researcher Ryan Hurd explained in a chapter for the “Encyclopedia of Sleep” and Dreams, “The historical distinction between nightmare and incubus accounts is largely emotional: terror predominates with the mare demon but incubus accounts include dread mingled with pleasure. On this point, medical anthropologist David Hufford (1982) suggests that the incubus tradition may be a subset of the classic waking nightmare or may be a different phenomenon altogether.”

1800s: The Curious Case of Gastric Upset (and other pseudo-scientific explanations)

The mainstream conception of nightmares still involved religious or mythical demons. But, starting in the 18th century, “medical men” made the case that nightmares had physiological, rather than supernatural roots. The prevailing hypothesis? Nightmares were a product of gastric upset, caused by rich food. Despite lacking scientific evidence, this dinner-based notion had staying power, and remained a popular misconception for well over a century after appearing in the seminal medical text the “Practice of Physick” in 1692.

It was said, for example, that Fuseli “supped on raw pork chops” to induce the nightmare he captured in his romantic painting.

The medical community didn’t universally accept the hypothesis. In 1815, John Waller, a surgeon of the Royal Navy, lamented experts’ lack of serious nightmare analysis in his essay, “A Treatise on The Incubus, or night-mare, Disturbed Sleep, Terrific Dreams, and Nocturnal Visions. With the Means of Removing these Distressing Complaints.” 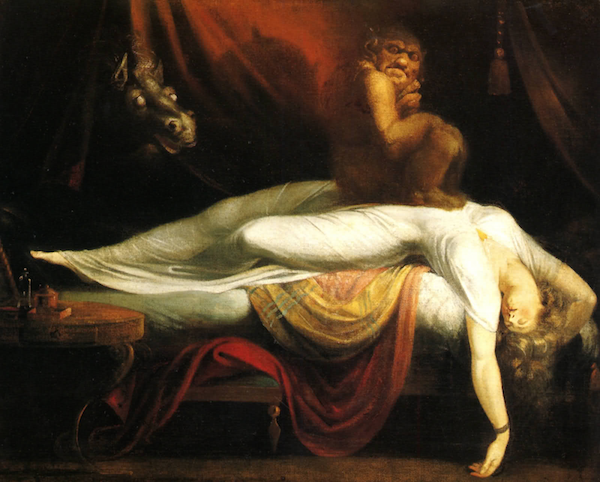 Those familiar with attacks, he wrote, “can bear testimony to the distress and alarm which it occasions; in many cases rendering the approach of night a cause of terror, and life itself miserable, from the dread of untimely suffocation.” Waller emphasized the severity of the condition and disparaged bunk beliefs about nightmares as a scourge of indulgence and back-sleeping.

Medical journals offer a glimpse into the 19th century back-and-forth. In 1899, the physician E. Graham Little analyzed 30 cases of night terrors (the precise difference between terrors and nightmares, here, isn’t clear) and published his findings in The Lancet. He wrote that “digestive disturbances do not play the important part in causation that is often assigned to them,” and described evidence of a causal connection between nightmares and epilepsy as “scanty.”

Starting in the 18th century, “medical men” made the case that nightmares had physiological, rather than supernatural roots.

Sigmund Freud characterized dreams as wish fulfillments — manifestations of repressed desires that served as “the royal road to a knowledge of the unconscious.” But his theory, originally articulated in 1899, didn’t explain the significance or function of nightmares nearly as well. In his 1920 book, “Beyond the Pleasure Principle,” Freud conceded that the distressful, recurring dreams of shell-shocked war veterans (aka, nightmares) were not wish-fulfillments. Psychoanalysts nonetheless tried to place nightmares in a traditional Freudian framework. In 1931, psychologist Ernest Jones argued that “an attack of the Nightmare is an expression of a mental conflict over an incestuous desire.” 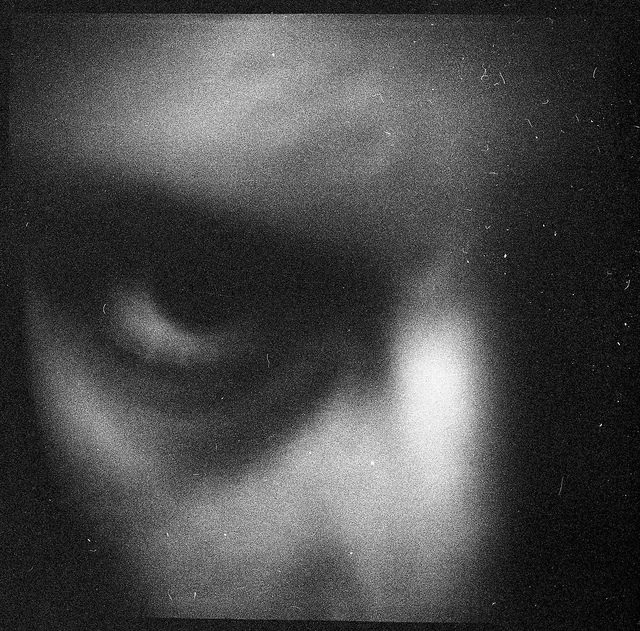 As the 20th century progressed, Freudian loyalty waned and sleep science emerged. The 1953 discovery of REM sleep — the active sleep-phase during which most vivid dreaming transpires — sparked efforts to understand various types of dreaming mentation, including nightmares. But, researchers struggled to draw clear, accurate lines between nightmares and similar, though clinically distinct nightmar-ish experiences. For example, in 1968, the neurologist Roger J. Broughton classified nightmares, sleep-walking, night terrors and bed-wetting as “disorders of arousal” that did not occur during REM sleep. We now know that nightmares do in fact occur during REM sleep and contain frightening or otherwise negative content. And researchers subsequently distinguished nightmares from night terrors, which occur during stage three or four of deep sleep, are typically accompanied by a piercing scream and contain no content whatsoever.

Traditionally, doctors saw nightmares as a secondary symptom of other disorders (e.g., anxiety, PTSD), rather than a disorder itself. In response to complaints of recurring nightmares, doctors would treat the underlying condition. Presumably, nightmares would fade accordingly. Beginning in the late 1980s, however, denizens of the sleeping and dreaming mind began using cognitive therapeutic techniques expressly designed to help people defeat the nighttime disturbances.

Harvard psychologist Deirdre Barrett first articulated Image Rehearsal Therapy (IRT) in her 1996 book, “Trauma and Dreams”. Through IRT, nightmare-havers “re-write” the endings of their terrifying dreams (while they’re awake) to transform the distressing nature of the nocturnal events. The technique challenges the therapeutic value in nightmares, and analysis of them.. Instead,IRT adherents see nightmares as a phenomena akin to a bad habit that the mind needs to un-learn. IRT helps people break the cycle without asking them to drudge up the roots of their sleep disturbances.

2000s: A Prescription for Bad Dreams?

IRT isn’t for everyone, as revisiting nightmares may be too upsetting for people in psychologically fragile states. And, research and clinical trials suggest, IRT takes at least two weeks to kick in. In the mid 2000s, on the heels of IRT, a blood-pressure medication called Prazosin (or Minipress) became an FDA-approved drug for treatment of nightmare disorder. Psychiatrists at the VA Mental Health Research Center in Seattle, Washington discovered the alternative use for the drug, which is thought to treat nightmares by hampering norepinephrine, a neurotransmitter active during fight-or-flight responses. The American Association of Sleep Medicine (AASM) endorses Prazosin as best-practice treatment for nightmares in PTSD patients.

2005 to Today: Nightmares as Therapy?

The development of treatment for nightmares, both as a secondary and primary disorder, hasn’t stopped sleep researchers from studying the basis, nature and function of nightmares. In 2005, two researchers explained nightmares as an evolutionary threat-simulation device. Basically, they helped ancient humans prepare to protect themselves from predators — like fire drills for the survival-focused cave-dweller.

In 2005, two researchers explained nightmares as an evolutionary threat-simulation device. Basically, they helped ancient humans prepare to protect themselves from predators — like fire drills for the survival-focused cave-dweller.

Other recent theories present nightmares as serving some therapeutic function, such as helping sleepers work through phobias. In this view, nightmares let people face, say, snakes and suicide bombers in a less harrowing context than the real, waking world.

But not all researchers see nightmares as a useful experience. They can be psychologically meaningful without having biological value. Support for this argument? People who suffer from nightmares fare worse than others in terms of mental health and general wellbeing.

The line between “normal” and “disordered”, however, remains fuzzy. The occasional nightmare doesn’t constitute a disorder — almost everyone has a nightmare in their lifetime and somewhere between eight and thirty percent of adults have at least one per month. Research suggests that doctors should accord more weight to the level of distress nightmares cause than the frequency with which they occur.

And, while nightmare no longer means sleep paralysis, a precise definition remains somewhat elusive. But, the short definition nonetheless remains controversial. For example, researchers debate whether or not nightmaresnecessarily cause awakening.