Are people appearing in the clouds over NY a glimpse into HEAVEN? Or ANOTHER DIMENSION?

A bizarre image is going viral online after mysterious figures appeared in the clouds above New York.

The photograph, said to have been taken by a resident of the Big Apple, shows what look like a crowd of giant silhouetted humanoids in the sky over the city.YouTube channel Paranormal Crucible was one of the first to share the images.In a video, the channel’s narrator said: “A possible paranormal event has been reported over the skies of New York.

“The mysterious phenomena photographed by a city resident appears to show a group of humanoid figures nestled in a thick layer of luminous clouds.

“If we look closer, we can clearly make out a large crowd of humanoid figures who appear to be observing the city below.” 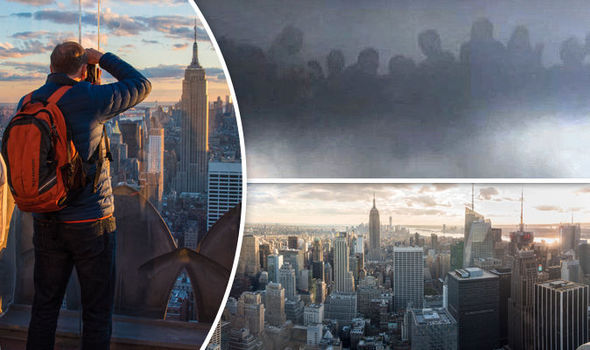 Faces in the clouds: The mysterious images above the NY skyline.

The images bear similarities to a floating city filmed appearing over China last year, which some suggested could have become visible through a portal to another dimension.The narrator added: “Many famous researchers have theorised that alternate dimensions, given the correct conditions, can briefly appear and manifest into our own reality.

“If this is true, then this remarkable image is further evidence that alternate realities do exist and multi-dimensional human beings do indeed inhabit these mysterious realms.”A promotional blurb for the video said: “Very strange image which appears to show at least a dozen humanoid looking beings hovering in the clouds.”Is this proof of an alternate reality that exists just outside our own? 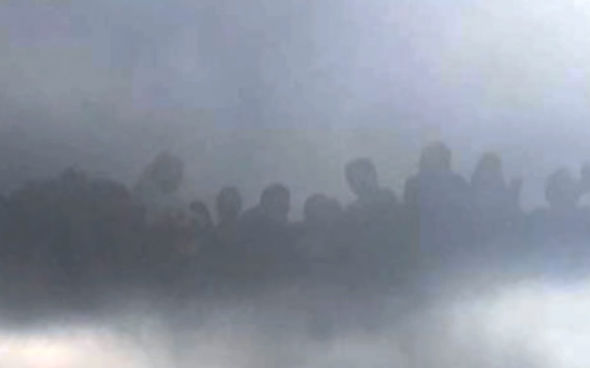 But it has emerged they are just a reflection of people on a viewing platform.

“Or could it be Angels watching over the people of New York? Very bizarre and very interesting.”Jonathan Wilkins, who viewed the video, posted online: “This is the great cloud of witness listed in the bible.”Little Foot added: “I’m not saying it is aliens, but it’s aliens.”But others said it was an edited fake.

A UFO expert, who analyses alien and paranormal pictures, has produced evidence it was just a reflection of people on the glass of the observation deck above the Rockefeller Center, which had been projected onto the sky in the picture.

And one online viewer of the video called Nick agreed.

He posted: “I’d love to say it’s just a reflection of people on the observation deck in the glass screens, but obviously aliens coming through an extra dimension is a more plausible explanation.”