10 of the Creepiest Folklores from Around the World

We all love folklore, especially the type that makes us tremble simply by recalling a line. I remember listening to my mother tell my siblings and I stories which had been passed down generations, of ghost men on horses still clip-clopping at night through the streets of her hometown or the lore of a bleeding tree that, when cut, the ground shook and buildings threatened to fall. While these stories are truly imaginative, the horror that they portray feels real to the listener because it is very likely that the words are coming from someone they know, and may even look up to.

What I find intriguing about folklore is that while it is a form of storytelling, it carries with it an immense burden – to identify with a people or group while simultaneously passing on an agreed upon belief. As The American Folklore Society states, “Every group with a sense of its own identity shares, as a central part of that identity, folk traditions — the things that people traditionally believe, do and make.” And so when we read or hear of a folklore that is foreboding, the weight of such stories is much heavier, filled with a history of belief stemmed from a people’s joint identity from so long ago.

Previously we wrote about folktales in our article ‘The Witch and the Folktale’. While the terms folktale and folklore are often used interchangeably, and while a folktale is atype of folklore, the two are different. Folktales refer to “stories that have been passed down from ancestors of a particular group of people to the younger generations through word of mouth.” Usually folktales are simply stories. On the other hand, ‘folklore’ includes “traditional beliefs, practices and stories of a community that have passed down from one generation to the other,” again through word of mouth. So much of what we believe or the superstitions we hold can be directly linked to folklore passed down from those before us, whether it is dropping a spoon and thus expecting visitors or being taught to stop oneself from whistling near a cemetery at night, folklore impacts our lives in ways we may not be fully aware.

Here are 10 examples of folklore from around the world which are dark in nature via ArticlesOfHorror.com 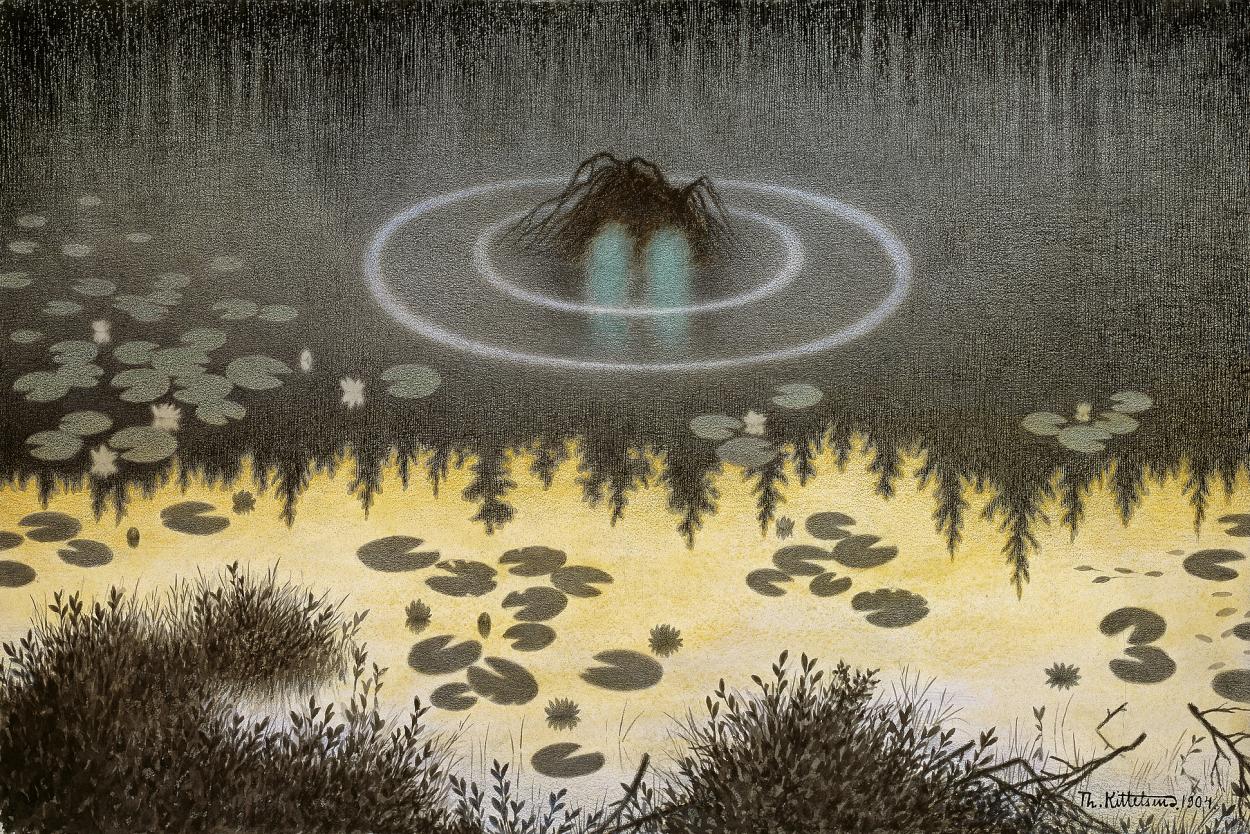 Mainly originated and widely-spread belief in Germany and Scandinavia, this creature with many variations to its name is a shapeshifter. The most popular form of the story tells of male human, a water spirit, who lures victims, particularly pregnant women and unbaptized children to nearby waters with his songs on violin. There he causes them to drown beneath the water. Water is key in this folklore, with which the Neck must be near in order to survive. Thought to be most active during Midsummer’s Night, Christmas Eve and on Thurdays, the only way to kill this creature is to speak its name. Another approach you might take is “If you brought the nøkk a treat of three drops of blood, a black animal, some “brännvin” (Scandinavian vodka) or snus (wet snuff) dropped into the water, he would teach you his enchanting form of music.” 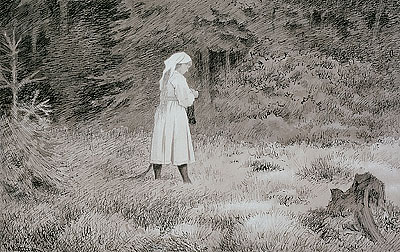 Another folklore from Scandinavia, this forest spirit is quite a seductress. There are stories of a male version, called a Huldrekall in Norwegian lore. The difference in males and females are stark. Females are said to be genuine beauties, while Males are grotesque and hideous. The succubus and mermaid legends are also closely tied to the Hulder belief. In the Swedish version, she was known to draw children and men into the forest never to be seen again. She can be a friend if treated with respect, even said to offer protection (especially to charcoal burners long ago who, in exchange, would leave her provisions.) 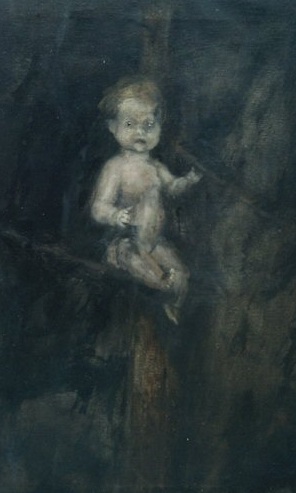 A Scandinavian folklore stemming back to the olden days when unwanted children (due to being conceived out of wedlock or to parents unable to care for them) could be abandoned in forests or other isolated area, often, sadly, left to die alone.  Children who like to create a ruckus in order to gain our attention is nothing strange, however add that these poor children are souls roaming the land in the hopes of a proper burial and you’ve got yourself one dark folklore. It is said that unbaptized, deceased children will look for lone wanderers at night and “jump on their backs, demanding to be taken to the graveyard, so they can rest in hallowed ground.” While they ride upon your back, they grow heavier the closer they are to the graveyard, so heavy in fact that they cause their carriers to sink into the ground. And if you are unable to make it all the way into the cemetery and the Myling’s final destination, in a fit of rage it will kill you. 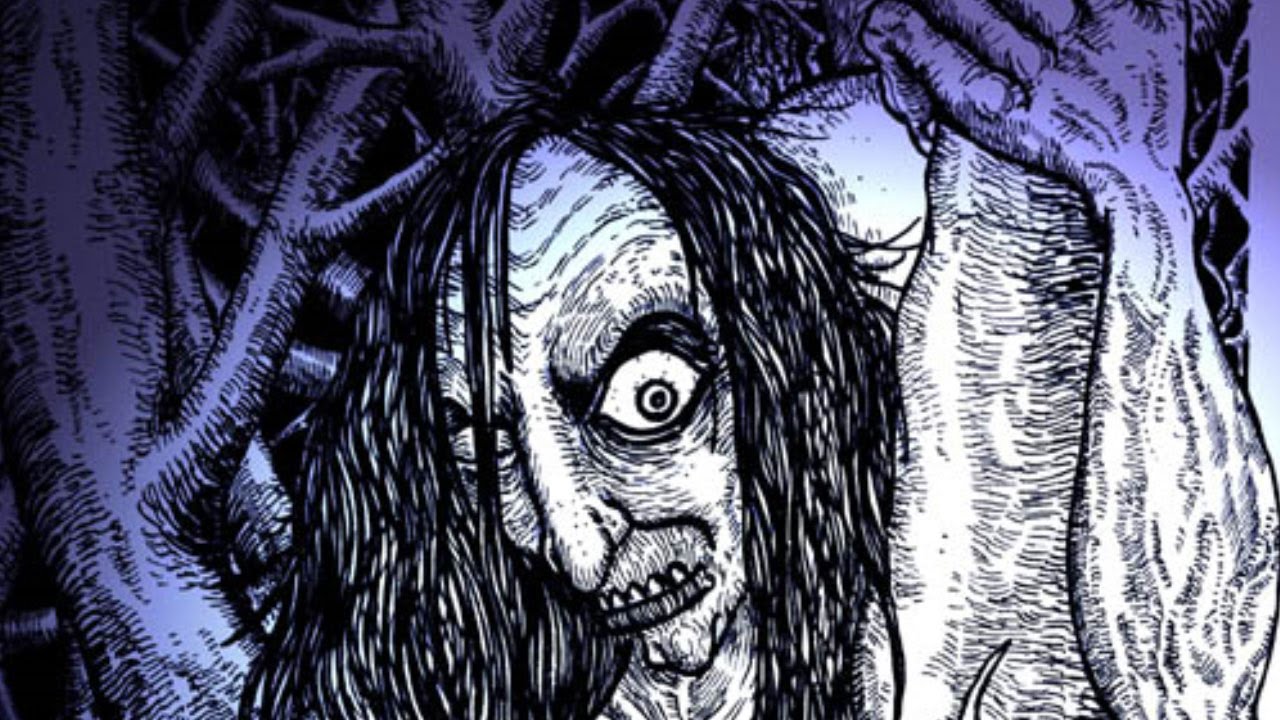 An English folklore, this blue-faced witch is hungry for lambs and human flesh (especially children). She has the razor-sharp claws to rip into skin, which she is known to hang on trees to tan before wrapping them around her waist to wear as a kind of skirt. Her claws are so powerful, she digs into the sides of mountains and cliffs to make herself a home (known as Black Annis’s Bower). Like much of folklore, this story is used to warn children not to misbehave, should Black Annis reach into their home to steal them away. One of the more popular folklores internationally, Black Annis has been featured in everything from video games to songs and books, including being mentioned by J.K. Rowling in a Harry Potter Fan Club newsletter in 1998 and 1999.

This particular folklore is considerably widespread to many countries around the world, touching nearly every continent. Most commonly known as a witch, this entity takes on many different forms according to the legend’s origin country. At its most basic, the Will-o’-the-wisp is an “atmospheric ghost light” as seen at night. Curious ones who follow the flickering light can be pulled away from safer paths as the light recedes. The strange apparition or creature is said to be fairies or “ghost candles” seen floating in graveyards. In Asia the lights target and confuse fishermen, leading them to drown, their souls joining the lights over bogs and wetlands. In Europe, the lights are believed to be spirits of the dead and stemming from Christian origins including souls lost between heaven and hell. In North America, the lights transform into brujas or witches. There has been many attempts of scientific explanation to the strange orbs, however, interest in such explorations has declined as the “draining and reclamation of swamplands in recent centuries” have taken away the environment in which the orbs were mainly spotted. Algonquian folklore tells of a cannibalistic monster who resides in the forests of the northern United States and the Manitoba region of Canada. It is an evil creature with supernatural powers associated with winter and famine. If one is too greedy or too hungry from famine, they may succumb to cannibalism, thus becoming a Wendigo. Many native tribes display a ceremonial dance to “reinforce the seriousness of the wendigo taboo”. While eating other human beings is the main taboo of the Wendigo spirit, it also encompasses anything that is deemed obscene. There is also a condition called Wendigo Psychosis which has been studied by scientists and psychologists throughout the last three centuries. The Wendigo includes possession, as it must first possess a human in order to change his or her behavior.

Zulu mytholoy includes a number of deities, including the Tikoloshe, or “dwarf-like water sprite” of evil intent. It causes harm by seeking out individuals who already have a tendency or nature of harming others to persuade them into doing the same to another. A shaman may create such a creature if they have been offended and aim to seek revenge. The creature may take on many forms, and even become invisible with a sip of water. If you want to keep the creature away at night, place a brick under the legs of a bed that belongs to you. Only a n’anga, or witch doctor, has the ability to defeat the Tikoloshe. 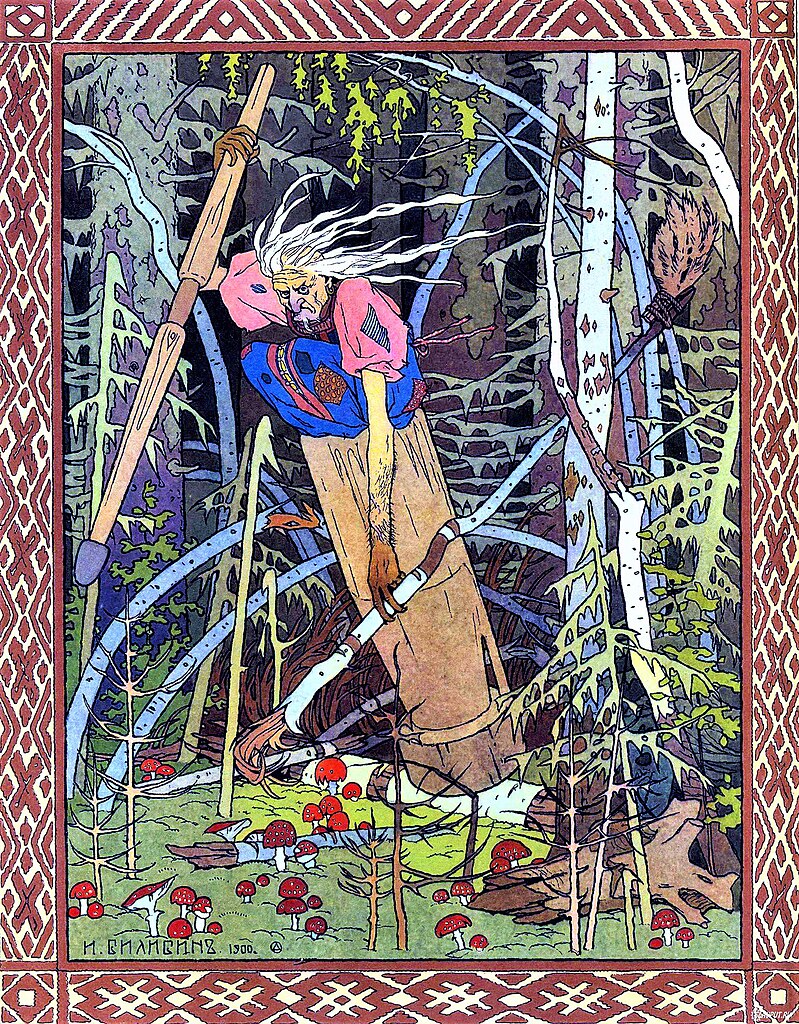 One the most well-known dark folklores comes from Slavic regions. A deformed old woman lives deep in the forest, she has the ability to fly on a motar while wielding a pestal. She is not evil in every story, often times helping those who need assistance, acting “maternal” towards them. However, cross the Baba Yaga and she just may devour you. She is known to have an entourage of spirits by her side and lives in a house with either one or two tall chicken legs underneath, allowing the house to move upon will. Baba Yaga’s house (or hut) therefore has a life of its own, which makes this folklore one of the more unique stories. 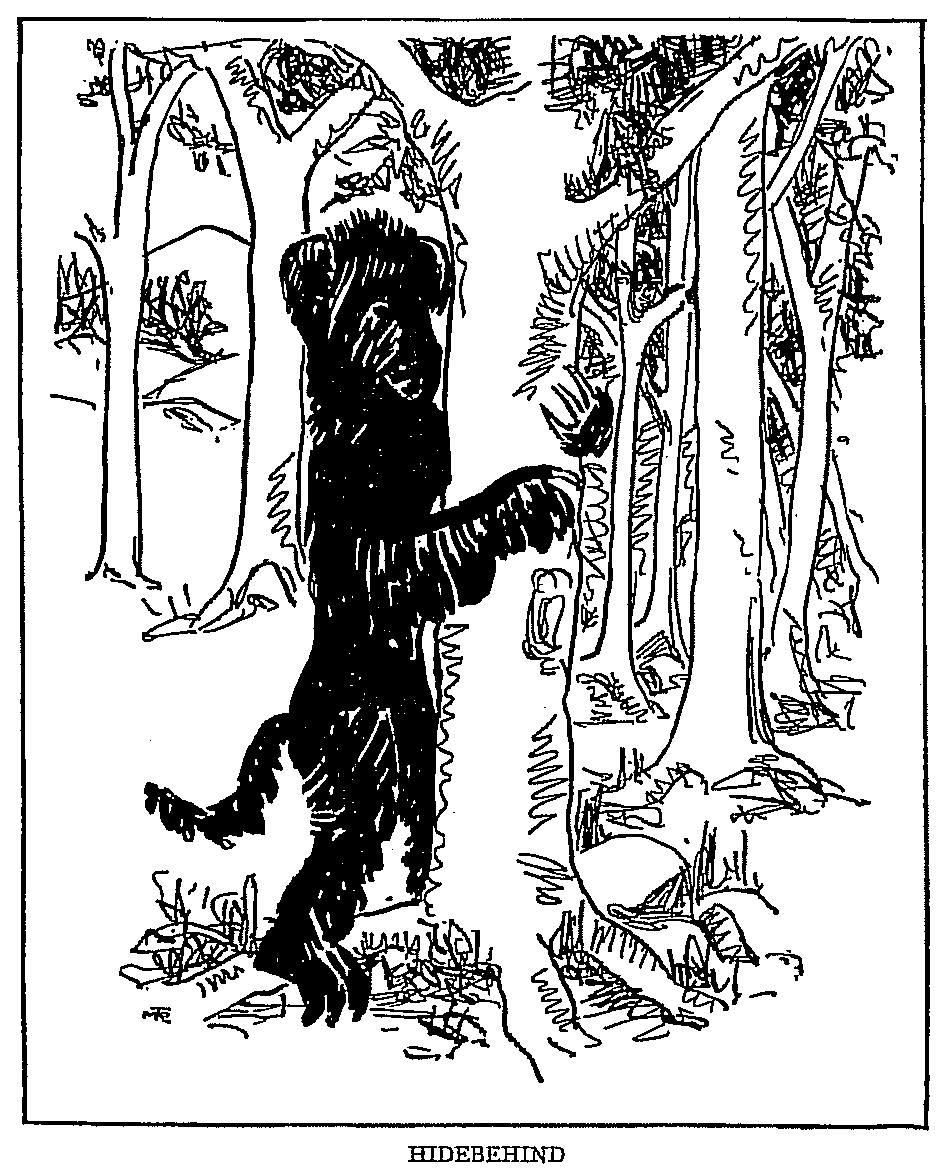 The next time you decide to go camping and feel eyes on your back, chances are it may be a Hidebehind. Known in American folklore to hide behind rocks, trees and bushes, this creature preys upon humans who cannot directly see it. Its uncanny ability to suck in its stomach to hide behind the most slender of tree trunks ensures that it will find and capture unsuspecting wanderers, devouring prey’s intestines for sustenance. How do you protect yourself? Carry some alcohol with you and you’re sure to avoid being eaten by the Hidebehind. Ending our list is demonic black dog from Old English origins of Britain. There are two schools of thought regarding the creature’s name, one being that “Shuck” comes from “scucca”, meaning “demon.” Another is that local dialect pointing to the word “shucky” means “shaggy” or “hairy”. Either way, this entity is one of the most frightening in ancient lore. The dog is an omen of death, it has red eyes (or green) shaped like “saucers”. The exact size of the dog varies, ranging from a large dog to the size of a grown horse. Being a hearder, if you hear his growl, you know him before you see him. Worst yet, as the story goes, you, as the encounterer, shall meet your death by the end of the year. The only way to avoid this end would be to close your eyes, never to glance at the creature, even if you feel its breath upon your face.

While this list only touches the surface of horror-filled folklore on an international level, we hope that this article is the first of many addressing the mysterious and deeply rooted cultural beliefs that enhance, intrigue, and influence the very essence of the genre’s storytelling today.